Track bolt is also called plow bolt or plough bolt, mostly used in the railway system and requires the high tensile and strength to assure the safety.

Track bolts, also called fang bolts or rail anchor bolts, are used to fix steel rails and rail chairs to rail ties, or to fasten rail joints to link rails. The track bolt is a bolt inserted through a hole in rail tie with a fanged nut that embeds into the lower surface of the tie. In general, the size of track bolts varies from requirements of the rail sections. The proper diameter and length of the track bolt can be determined by checking the applicable railway standards.

Track bolts can be divided into several types, such as, button head oval neck track bolt, diamond neck track bolt, rail bolt, fish bolt, Russian standard track bolts, clip bolt, clamp bolt and inserted bolt for Russia, anchor bolt, T-bolt clamp and other special bolts, etc. For fastening flat-bottomed rails, an upper-lipped washer can be used to grip the edge of the rail. They are more resistant to loosening by vibrations and movement of steel rails. In actual use, they are more effective than track spikes and screws and so are used in positions such as switch (point) tie plates and on sharp curves. 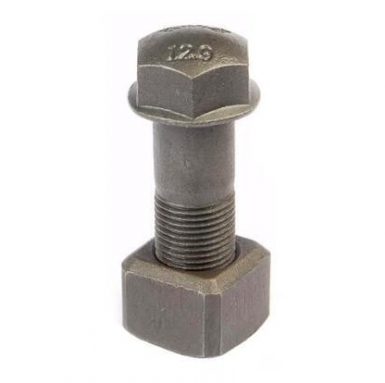